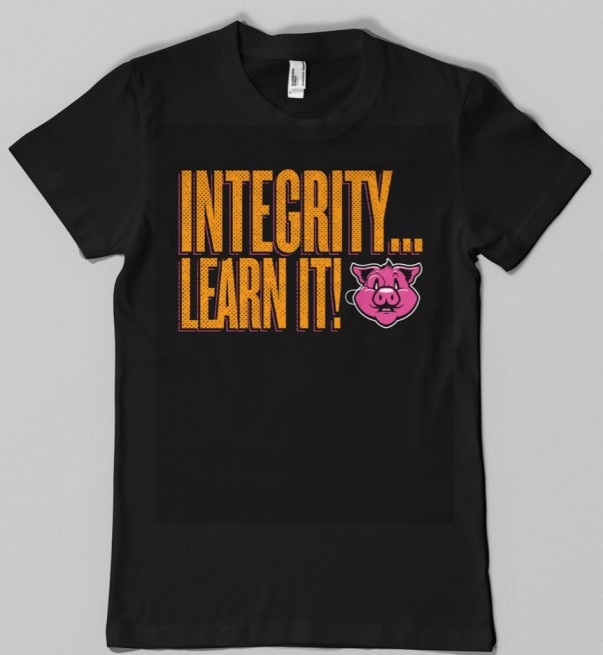 Update:  The Hodge Podge Food Truck “Integrity… Learn It!” t-shirts are now available!  Go to http://bit.ly/mYRmVx to order yours!

On September 11th’s episode of The Great Food Truck Race (on the @foodnetwork) host Tyler Florence (@tylerflorence) reveled that New York’s Korilla BBBQ (@korillabbq) had added extra money to their daily receipts in an effort to “cheat” the contest.  With their heads down the Korilla team left the show before they found out that if they had NOT cheated they would have come in third place and would NOT have been eliminated.  If Korilla BBQ had not been disqualified Cleveland’s Hodge Podge Truck would have went home.

As part of the episode Chef Chris Hodgson of the @hodgepodgetruck and @dimanddensum stated, “Integrity, Learn It.”  Today Chris Hodgson announced on his Twitter and Facebook pages this new t-shirt: What do you think of the t-shirt?

No word yet if the Hodge Podge Truck will put this shirt into production.  If they do we’ll ask Chef Chris for the first shirts off the production line as give-aways to you food truck fans!

See our other posting about the Hodge Podge Food Truck at http://foodtrucktalk.com/hodge-podge-truck-cleveland-oh-hodgepodgetruck.

Update:  The Hodge Podge Food Truck “Integrity… Learn It!” t-shirts are now available!  Go to http://bit.ly/mYRmVx to order yours!